Public procurement rules are changing! December 2020 saw the publication of the Green Paper, “Transforming Public Procurement”, and the start of a three-month consultation period. A year on and the government has published its response to that consultation, clarifying many of the key details that will be in the upcoming procurement Bill. It’s a hefty document but here we are here to break it down for you.

The overriding theme is one of simplification, and a trimming-down of the UK procurement regime post Brexit. As Minister of State Lord Frost said:

“These reforms are just one of the many areas where we are taking advantage of our exit from the EU’s rules to design a procurement system that is better tailored to the UK and our economic needs.

“They will open up new opportunities for our small businesses to win public contracts, boost efficiency and competition, and deliver better results for UK taxpayers.”

The planned changes will have massive implications for the development of Social Value, given that around £300 billion of public spending each year will be affected.

They are also intended to make it easier for SMEs to compete in public procurement – notably a single central register for commercial information that is to be free for all users.

So, we’ve prepared this handy summary of some of the most important parts!

The principles of public procurement that will be enshrined in the new law make explicit many of the driving forces that underpin Social Value.

“The concept of “public good” will be framed as an objective of maximising the ‘public benefit’ to support wider consideration of social value benefits, and address concerns about any potential conflict with local priorities. Similarly, value for money and integrity will be statutory objectives.”

Under these new rules, procurers will be able to give more weight to bids that create jobs for communities, build back better from the Covid-19 pandemic and support the transition to net zero carbon emissions. These social value factors mean that buyers don’t just consider price alone and the government have made this clear by changing the term “Most Economically Advantageous Tender” (MEAT) to  “Most Advantageous Tender (MAT)” – in recognition of the expanded range of considerations that contracting authorities must have regard to, including Social Value.

They also intend that these new rules will allow local leaders and communities to grow the private sector and raise living standards in their area, by being able to procure more locally and flexibly.

One Uniform Regulatory Framework for Procurement

81% of responses supported this objective of the Green Paper. Although they are keeping certain aspects of the Utilities Contracts Regulations 2016, the Defence and Security Public Contracts Regulations 2011, and the Light Touch Regime. The new system will be based around three “modern procedures” rather than the complex and rigid arrangements that have been in place to date:

One outcome of this is that it will make it easier for SMEs to compete in public procurement, something which many have stayed clear of in the past due to complicated and bureaucratic systems.

The new Procurement Review Unit (PRU) which will replace the Public Procurement Review Service (PPRS) will have investigatory powers and its main focus will be on addressing systemic or institutional breaches of the procurement regulations. But of greater interest to many will be the new powers proposed for excluding suppliers with track records of poor delivery, fraud or corruption from future contracts – on both a mandatory and discretionary basis.

Mandatory grounds for exclusion will include:

Discretionary exclusion may be incurred by:

In addition, “poor performance” associated with breach of contract will be grounds for discretionary exclusion: 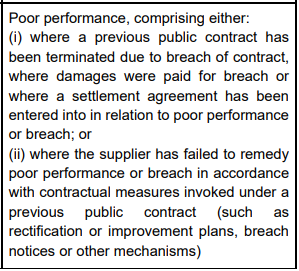 As the procurement regime changes, we’ll keep you up to date on everything that happens, and help you to make sure that all the good that your business is doing is captured in full. If you are struggling to quantify and report on your business’ Social Value activities, the Thrive Platform is an invaluable tool. Get a free demo of the Thrive platform here!